Poverty can be the perfect teacher for people who want to be wealthy. Poverty teaches you what you want in life and what you don’t want. My parents learned early in life what they did not want their lives to look like. They both came from poverty and they did not want to stay there or to return. However, they also learned that, in most cases, poverty is not fatal. When they were children living in poverty, there was no welfare, no food stamps, no free school lunches, or any of the social programs that we now have available for families struggling with poverty. They grew up in rented homes with no heat, no electricity, and, in my mother’s case, no indoor plumbing. These were tough lessons to learn, but they learned those lessons and used them to help shape their successful future.

I think my parents married as teenagers to escape their difficult family situations. I think they thought that if they worked together, they could better their lives. I often wonder if they had a plan and goals, or did they just throw caution into the wind. I suspect that they had no plan. They had experienced the Great Depression, the devastation of the Dust Bowl, and World War II in Washington DC. My mother had survived a severe accident. I think these experiences gave them the courage to start living on their own at a very young age, but they wanted to do it together. They married in 1952. My brother was born in 1953 and I was born in 1954. My sister was born in 1964 when things were different in our family.

My grandmother’s goal of home ownership was shared by my mother and father. Their first goal was to own their first home. My mother did have a plan for this goal. She started her family’s wealth creation with a dime. She decided she would save enough dimes for a down payment on their first home. Every day when my father returned home from working (he worked three jobs), she would take all the dimes from his pockets and add them to her savings. She shared her plan with my grandmother; and I’m sure my grandmother gave her as many dimes, as she could spare. Shortly, she had reached her goal of $1,500 in dimes and they owned their first home. She was still a teenager and my father was barely in his 20’s with two children under two. It was tough, but she did it. As they say, “When the going gets tough, the tough get going.” 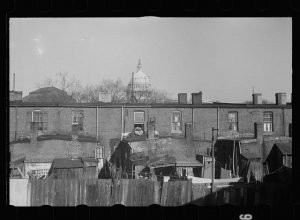 Poverty in My Mother’s Neighborhood in Washington DC

My parents’ next goal was to own a rental property. Within five years of buying their first house, my parents bought the house next door. These houses were very modest houses in a low-income neighborhood. Our family moved into the new house, and we rented the house next door. Shortly after that move, my parents bought another modest house, less than 1,000 square feet, in the same neighborhood. Then, our family moved into that house. Within ten years, my parents owned their own home and two rental properties. They were both under 30 years of age – not bad for two kids coming out of poverty. And it all started with a dime and a goal of home ownership – the American Dream! When my mother died suddenly at the age of 69, she and my father had accumulated an estate of over $1,000,000.00 in assets. They grew their wealth slowly and steadily by investing in rental properties, stocks, bonds, and saving their money. They always lived in modest homes. They were most proud of having provided affordable, clean, and safe housing to over 20 families.

By the way, start saving your dimes; it’s still possible to buy a house with only $1,500. I can show you how to start accumulating wealth for your family by buying your own home, and then buying rental properties. My family did it, and so can yours.